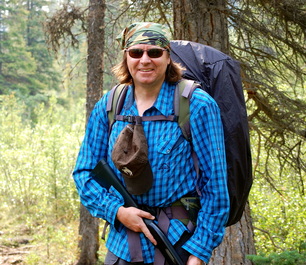 Curtis Rattray is a member of the Crow clan and Nalokoteen (end of the ridge nation) of the Tahltan Nation and his Tahltan name is ‘Ninth Glun adz’. His mother is Tahltan and his father is Scottish-Canadian.

Curtis has twenty plus years Wilderness Skills and Training in all seasons including:

An experienced backcountry hiker and camper, since his teen years Curtis has spent much of his time out on the land. He grew up working at his family’s Tahltan fish camp and was an army cadet and cadet instructor which requires camping in all seasons. He also worked for BC Parks for 8 seasons and as a trooper in the Armoured Corps Canadian Armed Forces. He served as a regular and reserve member of the Canadian Armed Forces and has received the “Canadian Decoration” for 12 years of service.

Curtis has a Bachelors Degree in Environmental Studies and Political Science from the University of Victoria. Recently he was the Aboriginal Languages Coordinator with the First Nations Education Steering Committee. He also served as the elected Chairman of the Tahltan Central Council for 9 years and was responsible for representing the Tahltan nation on the reconciliation of inherent Tahltan rights and title issues.

His other interests are reading, landscape drawing and photography, jogging, hockey, camping, hiking, snow shoeing and cozying up in front of a fire.